Cocktails in the Historic Tap Room 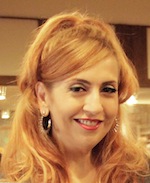 I always love a chance to dress up and head out to an elegant setting. Recently the Art Deco Society had a gathering at the Tap Room, located inside the historic Langham Huntington Hotel in Pasadena. A rare, surprise cold snap in LA had me ditching what I was going to wear and reaching for my velvet dresses. I opted for this slinky, black Film Noir Dress from Pinup Girl Clothing, black fishnets, stilettos and a vintage orange hat with pearl and rhinestone details. 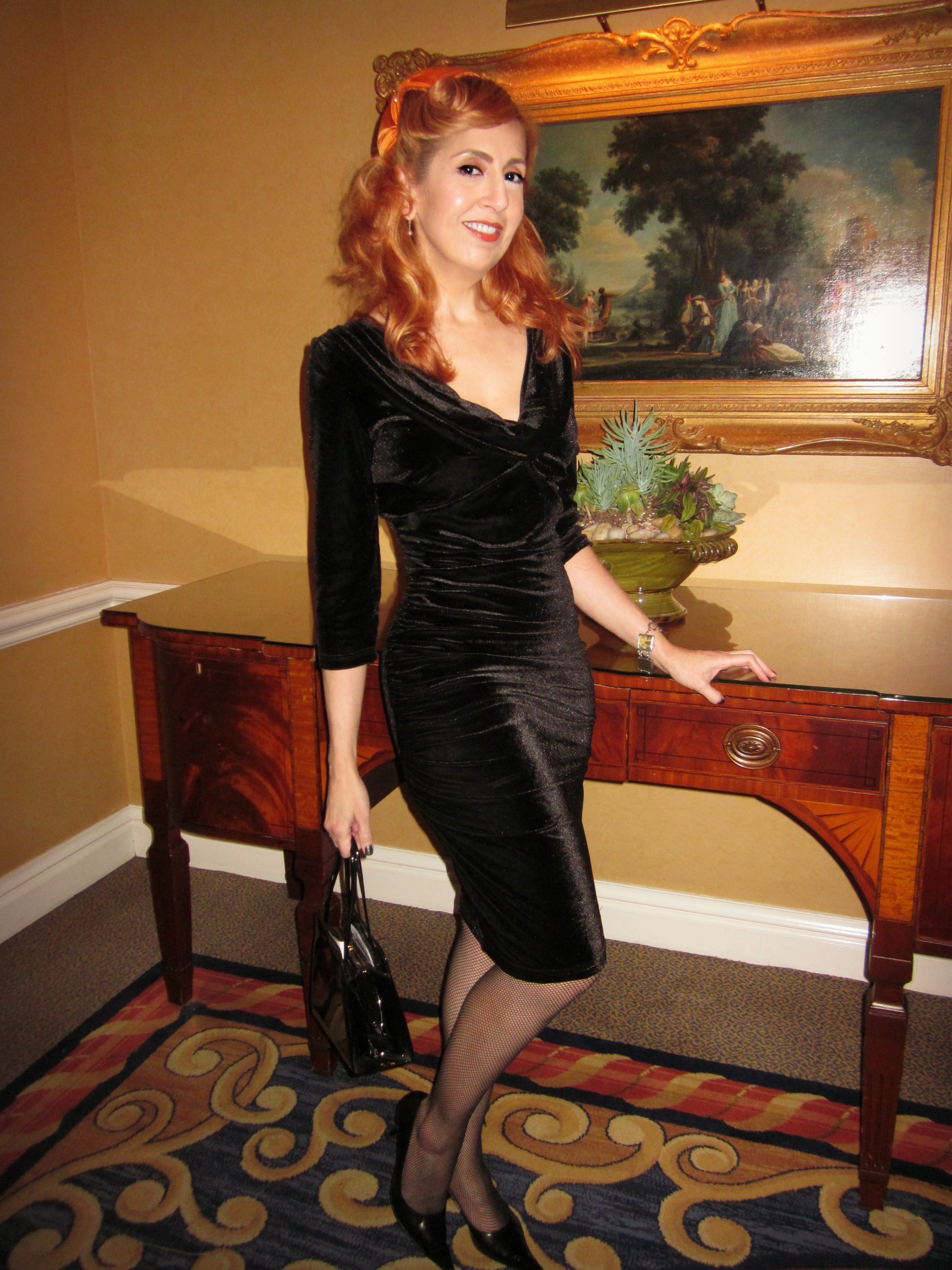 I met my friends inside the lovely lounge setting designed after the hotel’s original bar, which opened in the 1930s, shortly after the end of Prohibition. The Tap Room features innovative cocktails and upscale bar food. The room opens up onto a terrace deck area that overlooks the sprawling hotel garden framed by palm trees and hilltop view of LA. 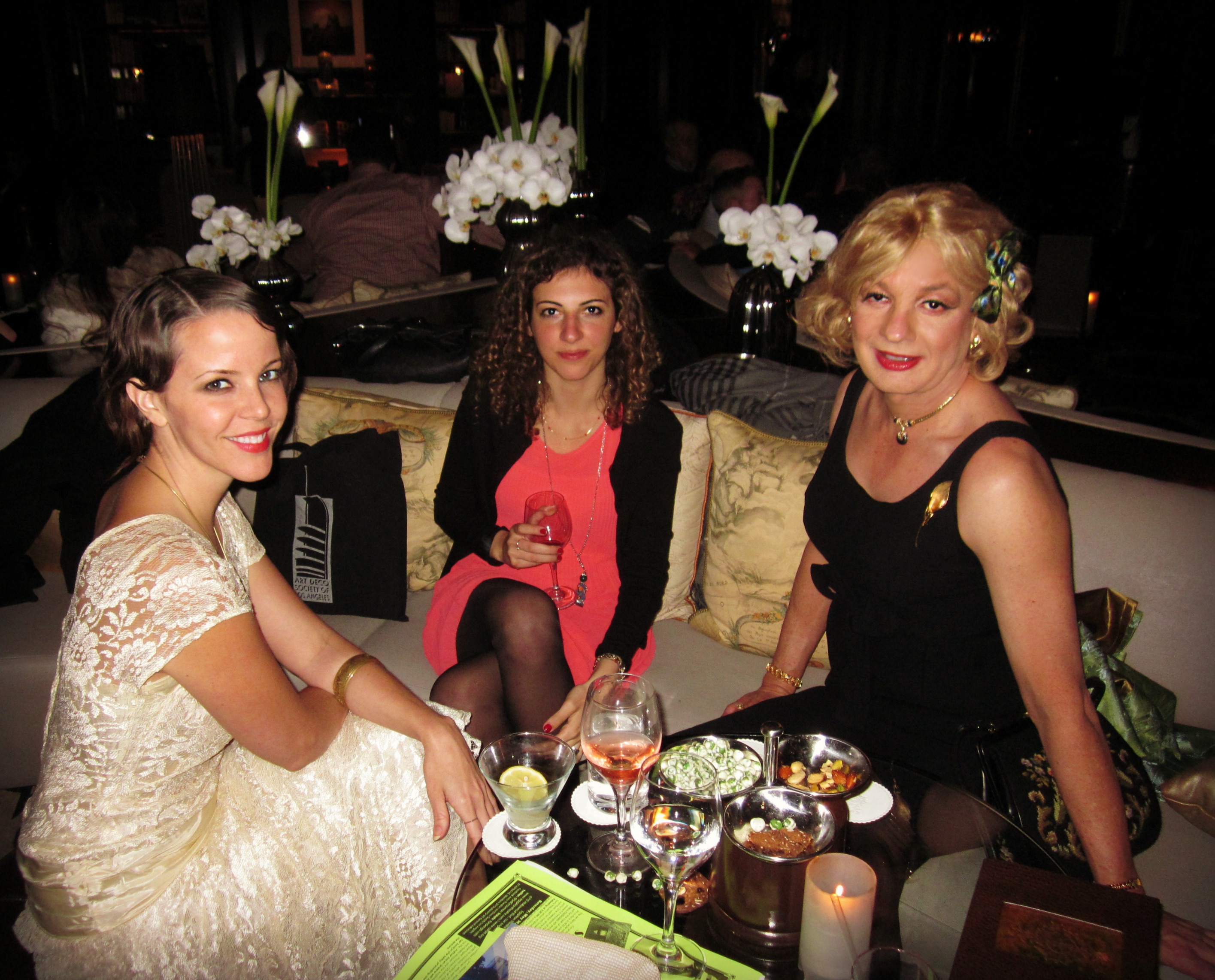 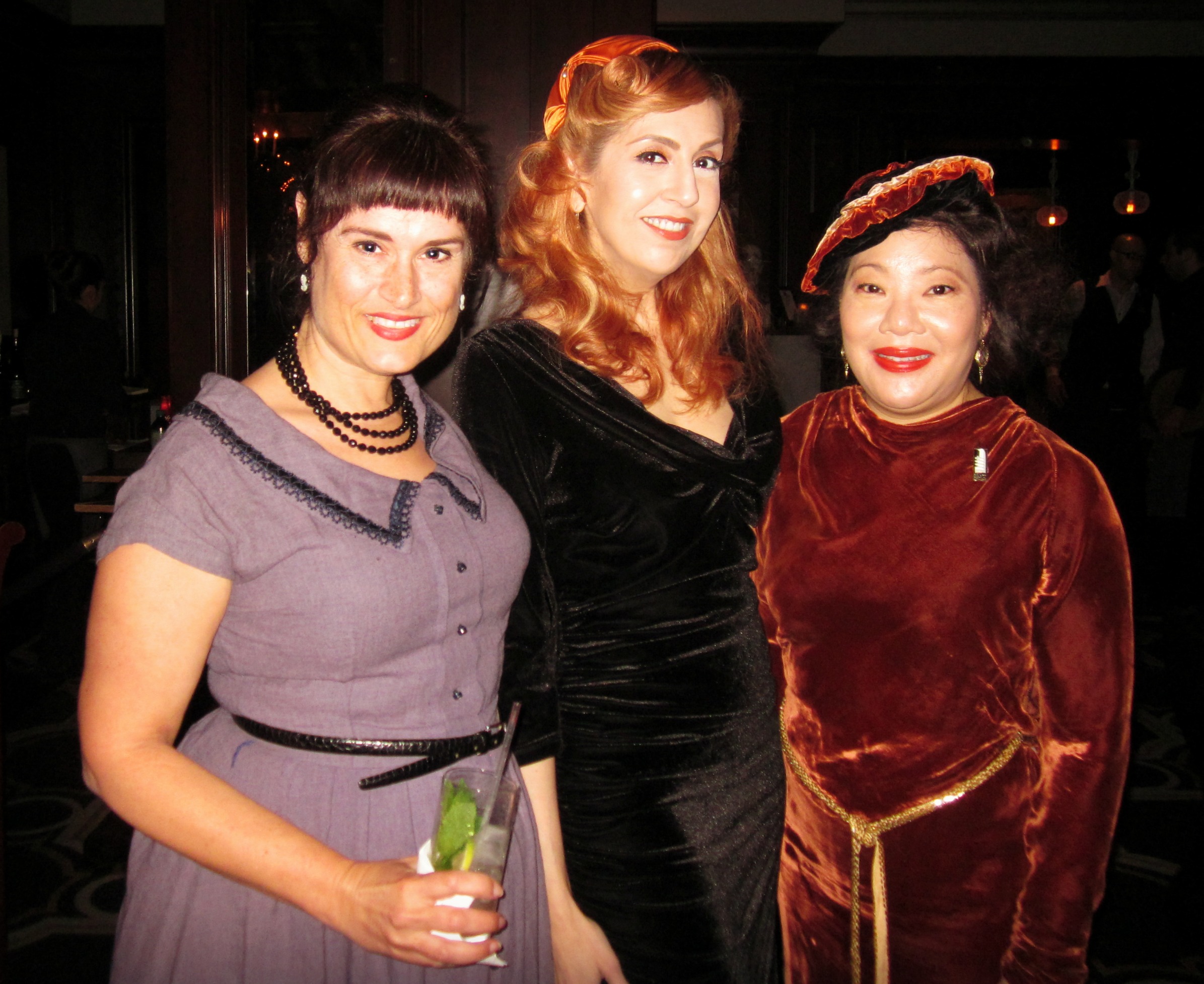 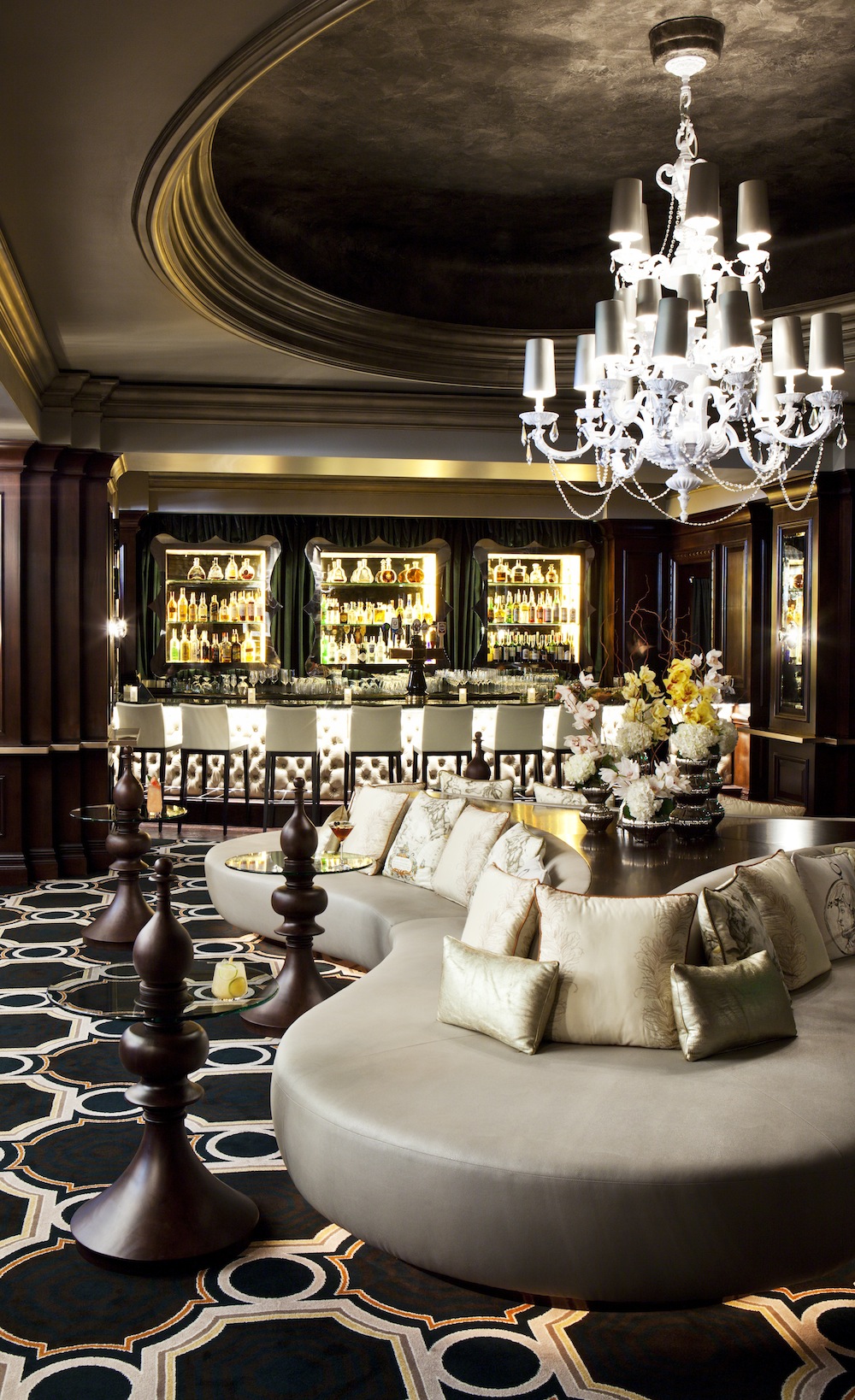 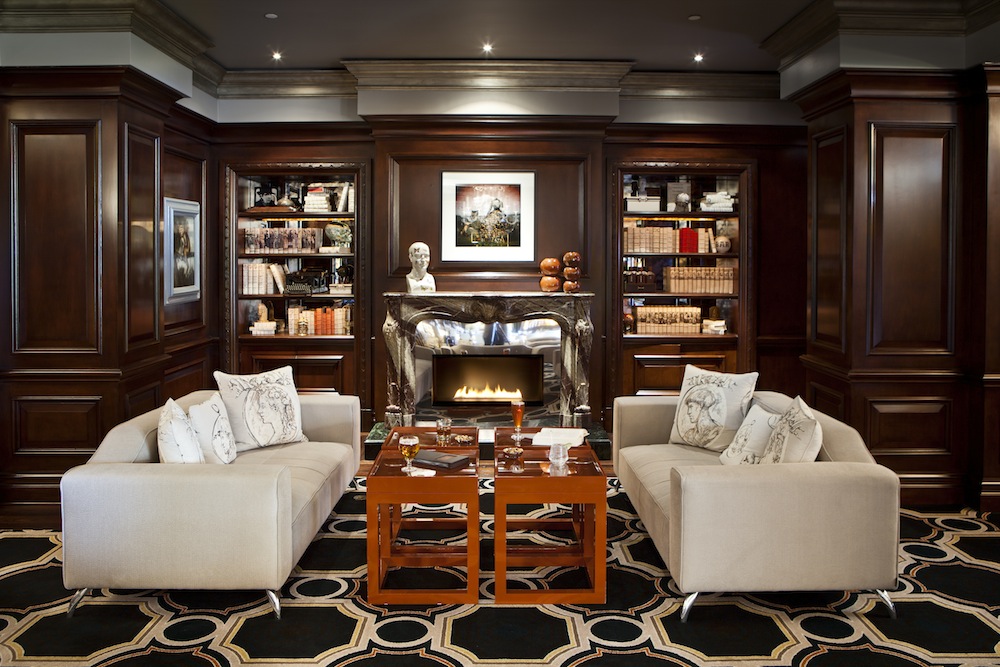 If you are interested in having a sit-down dinner before or after Tap cocktails, be sure to check out the hotel’s award-winning steakhouse, The Royce.

The Langham Hotel just celebrated its 100th anniversary last year and thankfully has not gone the path of so many modern-obsessed renovators. It’s maintained its style and preserved its history. There is a choice of classic rooms, historic suites, and cottages. I can tell you first-hand, it’s fabulous place to kick up your feet. I had a staycation there a couple of years ago and it really feels like you are away from the bustle of Los Angeles and in the heart of luxury.

A Toast to Mad Men at The Prince

With the hit TV show Mad Men coming to an end, so many of my friends are sad to see it go – we can’t get enough of the style and the scandal, and the suburb detail of the period-perfect fashions and interior design. I’ve especially enjoyed the smart writing and clever twists and turns of each character punctuated with both humor and drama and a soundtrack that always hits the right note at pivotal moments.

So in tribute, I gathered my vintage-loving pals for a night of cocktails celebrate our love of the show. After doing research for previous blogs on places around Los Angeles where the show actually filmed, I decided we should meet at The Prince Bar and Restaurant. Lit with red lights, red circular booths, velvet baroque wallpaper with noble accents of knights in shining armor and romantic paintings, The Prince looks like a place where time stands still. Even calling on the waiter harkens back to another time – little butler lamps with buttons at each table to ring when you want service. 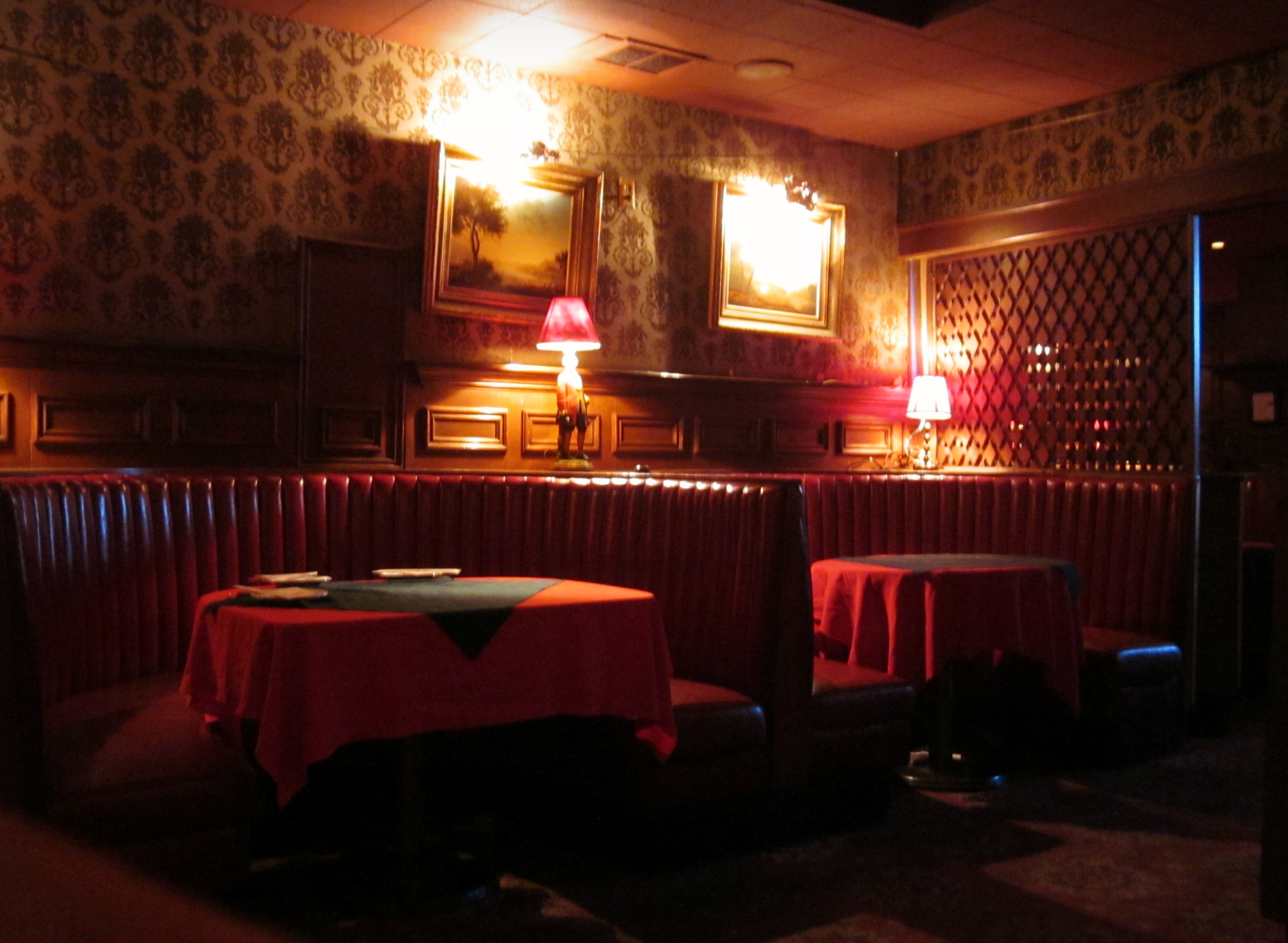 A beautiful horseshoe wood bar is a focal point and where my pals met up. While the bartender could have been a little better (my friends had to instruct him how to make drinks like a Sidecar and a Tom Collins and I found the wine selection limited to cheap chardonnay and merlot), we were all in awe of the surroundings – especially after seeing Don, Betty, Roger and Joan sitting at the bar and booths on the show.

For the evening I wanted to wear something special so I brought out my turquoise and gold shimmery wiggle dress by Tatyana and gold sparkle stilettos. 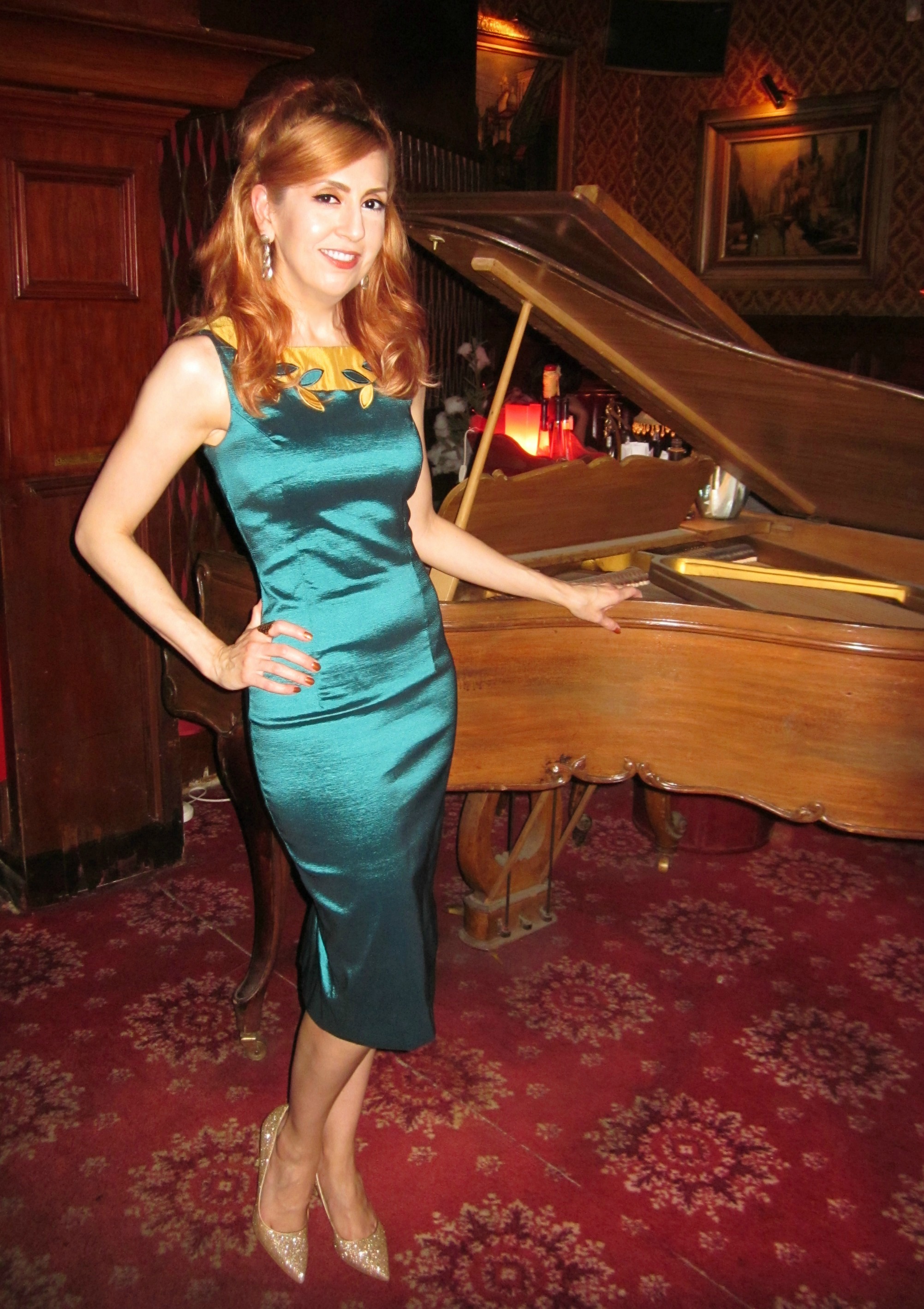 My pal Sandra D. didn’t disappoint in a customized vintage dress actually worn on Betty Draper on the show, which she scored at a costume sale. Word has it both Mad Men actress January Jones and costume designer Janie Bryant have been trying to get that dress back. But Sandra isn’t selling – and seeing her look so good in it, it’s clear why! 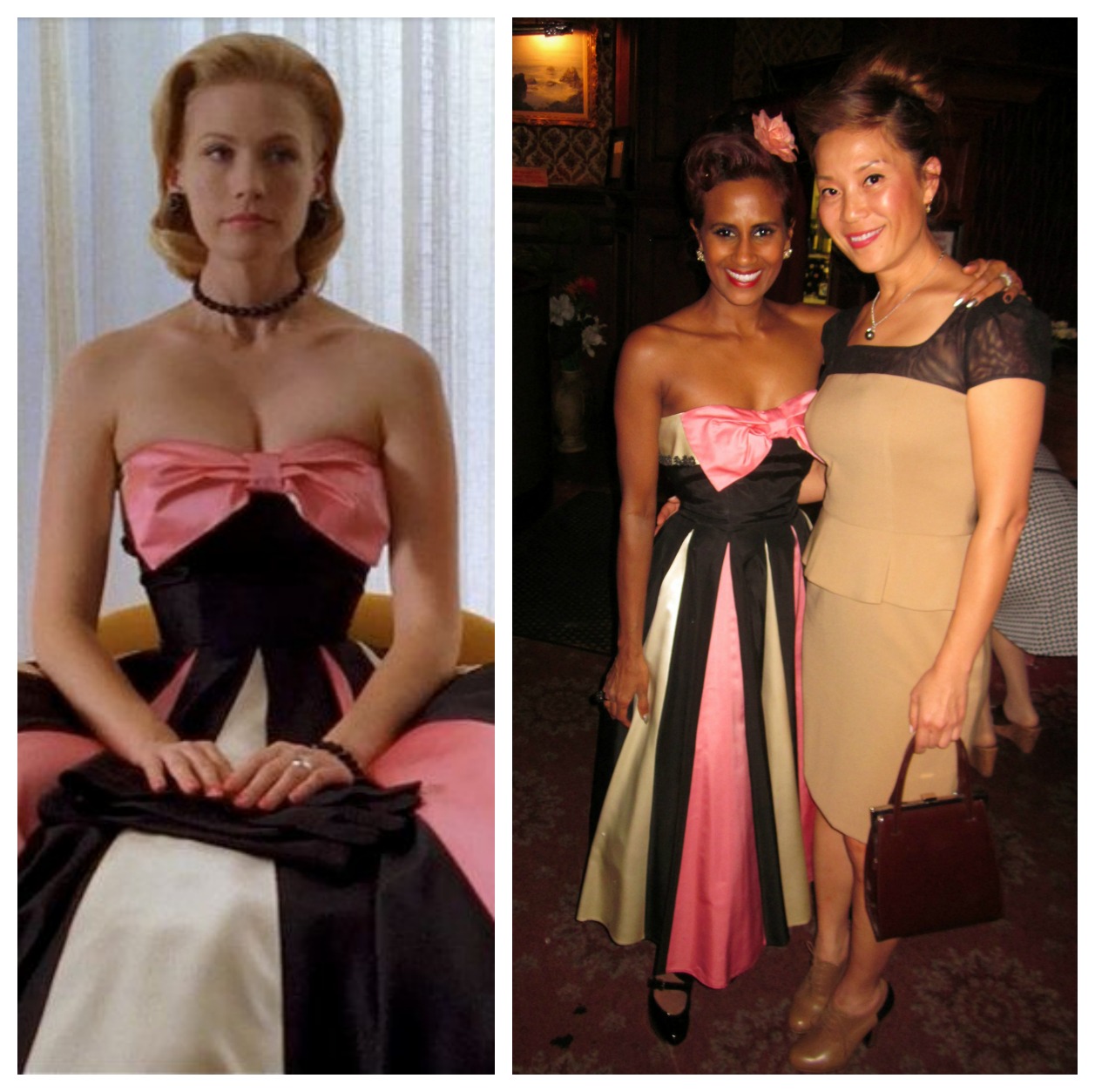 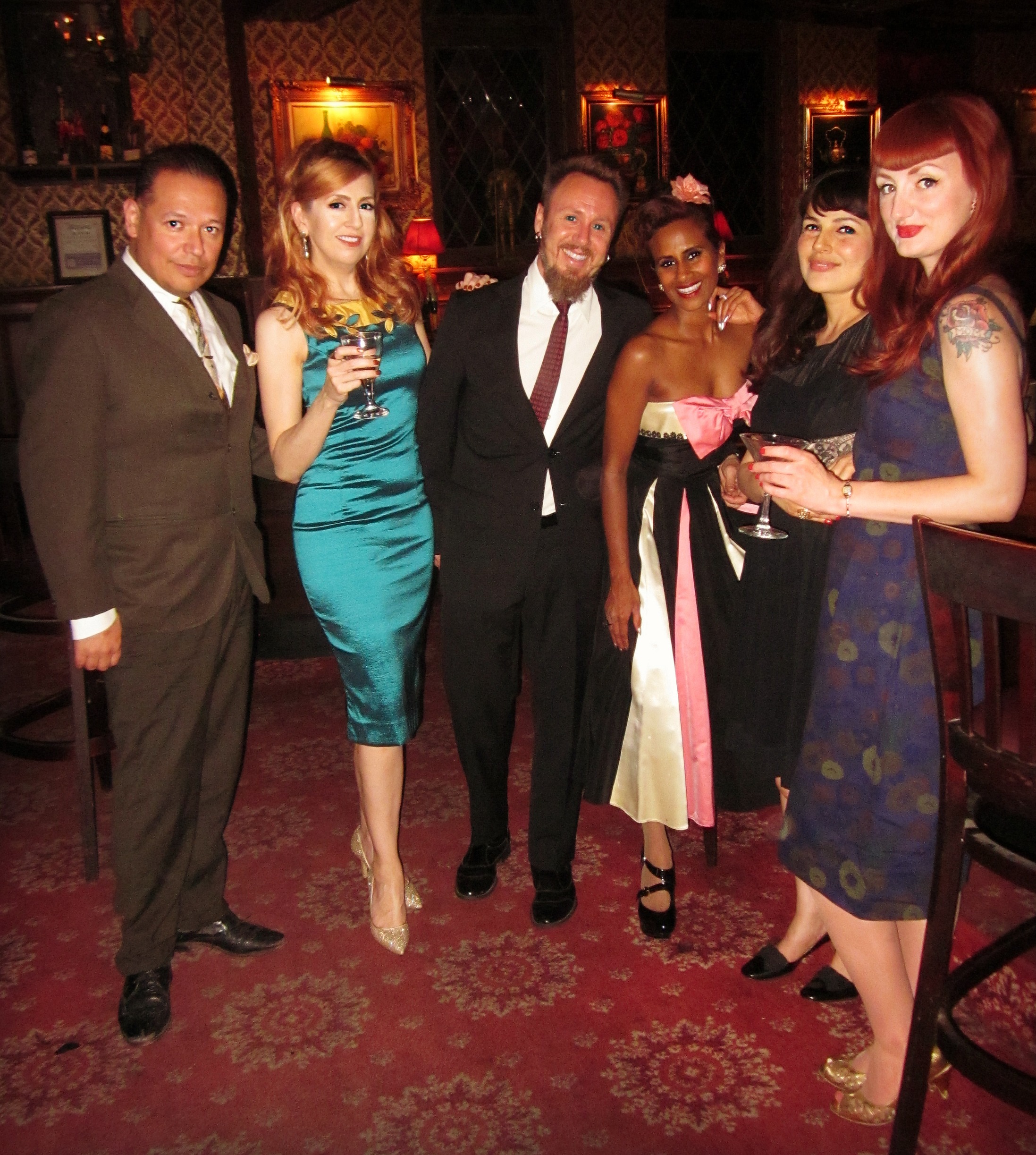 So with a toast to good friends and an amazing show, we say thank you to Mad Men for years of smart, stylish, entertaining television. I look forward to binge-watching it again and again!