WACKO/ Soap Plant in Hollywood is probably the greatest pop culture store ever opened and one of the longest standing boutiques in Los Angeles. It started in Los Feliz in the early ‘70s as a family run shop selling hand-crafted soaps, ceramics and leather wares. By the early ‘80s it became legendary when it moved to Melrose Avenue in Hollywood and expanded to include a pop culture toy and book store and was a well-known hangout for rockers, nerds, collectors, and hipsters to get their knick-knacks and generally see and be seen. Owned by Billy Shire, the shop has a long running history of hosting events from art openings in the La Luz de Jesus Gallery to book signings and concerts. Basically, any excuse for a party with Hollywood underground’s coolest! 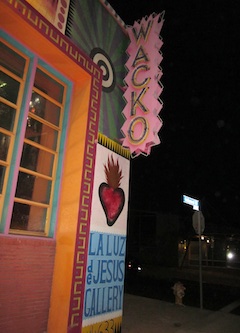 For a little taste, hit up Billy’s Fish Fry & Community Social, which takes place the last Thursday of the month and features a diverse mix of bands and spoken word, with hearty vibe of anything can happen! When I last went there,  The Purple Gang were headlining with members of Tex and the Horseheads, The DI’s, The Hangmen, Kix, Thelonious Monster, The Joneses and Rhino Bucket (some of you ‘80s LA punk scenesters know these bands well!) Plus, there were stand-up comics, live art creation, a special acoustic performance by Prima Donna (who I reviewed on the blog previously as one of my current favorite local bands), a jam session featuring Michael Rozen, Johnny Indovina, Billy Shire and Lee Joseph. And serenading everyone into the store, was one of my oldest and dearest scenester friends, Francois from Motorcycle Boy and a few of his buddies playing with the ol’ clip on belt amps. They even pulled in my pal Fabby to play washboard! Click on the image below to check out the photos: 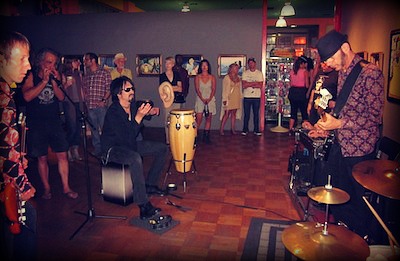