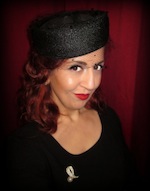 We’ve enjoyed six fabulous seasons of “Mad Men,” watching Don, Roger, Peggy, Joan and the gang saunter stylishly through offices and bars. Now with the series ending (season 7 will be the last), we just can’t let the party go. I discovered several bars throughout Los Angeles where “Mad Men” actually filmed so you can go out and drink like Don and let the madness live on.

In case you didn’t know, though Mad Men is set in New York City, most of the locations are actually filmed in Los Angeles. And I have to tip a fedora hat to their location scouts for finding some of the most esthetically pleasing watering holes in town, many which are historical landmarks.

So  keep the scandal, mystery and intrigue going, cocktail in hand, and live like “Mad Men.” And don’t forget to dress to impress.

Here’s where to go: A classic dark wood interior and saloon-style bar is given extra appeal by having to descend a set of stairs to the basement level get to it. Located in downtown LA, this bar is dark, cozy and relaxed with a solid Irish influence.

The ornate décor screams money, baby and you’ll feel like a million bucks when you saddle up to the Gallery Bar and Cognac Room here or take a meeting over a light meal in the gorgeous Rendezvous Court. This hotel opened its doors in 1923 and its mix of Spanish-Italian Renaissance and Mediterranean Revival, Beaux Arts styles made it an instant sensation. Frescos, marble and bronze provide elaborate texture to make this place feel like the utmost in vintage luxury. Red booths a-plenty but with dive bar appeal, the HMS Bounty has been a staple for Hollywood scenesters venturing into the edge of Koreatown. Located on the ground floor of the historic 1920’s Gaylord Apartments, you can have no-frills, greasy spoon of a meal washed down with a stiff classic cocktail (no fancy mixology going on here)  or just mingle with the array of hipsters and regular barflies at the bar. Probably the only cool place in the industrial area of Vernon, which is East of Downtown LA. La Villa Basque’s charm is in the fact that it looks like it hasn’t changed since the ‘60s. Inside, is a gorgeous bar and round booths with colorful upholstery that you could easily see the Rat Pack holding court in. Definitely an outside-of-the-party-zone destination location but worth a visit. It doesn’t get more classic Hollywood than this. Musso and Frank is an icon of Hollywood’s Golden Era. Opening in 1919, the place has been a watering hole and dining spot to famous authors and movie stars — F. Scott Fitzgerald, Charlie Chaplin, Marilyn Monroe, Humphrey Bogart, Elizabeth Taylor to name a few. So even if you go there to slip in the same buttery red leather booth as Don Draper, know that it was warmed by many stars before him. One word: glamour. Located in the historic 1928 Oviatt Building, the Cicada provides the luxurious setting of art deco elegance with its gold trim and cubist flourishings.  This  dance and supper club offers a chance to step into a time capsule for a night of decadent sophistication. Check the calendar for host Maxwell DeMille’s many retro-inspired events featuring jazz and swingin’ big bands.

Tucked in an unlikely corner of residential Koreatown, The Prince envelopes you in tones of red (a color that makes everyone look good, even before a few cocktails!) From the red lighting, to the red leather booths, and red velvet flocked wallpaper, it’s a generous space, punctuated with a gorgeous horseshoe bar and grand piano. I’ve seen many scenes of Don having dinner here on the show.  It’s been written that The Prince once served celebrities and royalty. These days its more of a best kept secret for those wanting a taste of  bygone eras when everything seemed just a bit more glamorous.

I think I see a bar crawl in my future!